The Department of Geological Sciences in the Jackson School of Geosciences at The University of Texas at Austin seeks to hire a tenure-track Assistant Professor in Hydrologic and Water Science. We seek candidates at the forefront of their science and who have interdisciplinary research and teaching interests. This search covers a wide range of disciplines related to water. Candidates interested in chemical, physical, and ecological processes and water resource sustainability, are encouraged to apply. As part of the Jackson School of Geosciences, the Department of Geological Sciences has over 50 faculty and a community of research staff with a broad range of specialization and access to outstanding research facilities and support.

Applicants should submit a letter of application, curriculum vitae, statements of research and teaching interests, and contact information for at least three references. Submit electronic copies of these materials online at https://apply.interfolio.com/39541. For questions related to the search, please contact dgs@jsg.utexas.edu. Review of applications will begin January 6, 2017 and continue until the position is filled. The University of Texas at Austin is an Equal Opportunity Employer with a commitment to diversity at all levels.
By RowanMartindale - November 23, 2016 No comments:

More information about the Department can be found at http://earthsci.st-andrews.ac.uk/ and informal enquiries should be directed to: Dr Tony Prave (ap13@st-andrews.ac.uk).
The closing date for applications is 20 December.
From St. Andrews:
Our analytical facilities are outstanding and underpin research at the forefront of isotope geochemistry and biogeochemistry. Our work is complemented by collaborations with researchers in the Schools of Biology, Chemistry and Physics, and the Environmental Change research group in the Department of Geography and Sustainable Development, as well as with the Scottish Oceans Institute, the European Marine Biology Research Centre, the Marine Alliance for Science and Technology for Scotland, and the Centre for Advanced Materials.

Applications are particularly welcome from women who are under-represented in Science posts at the University.  You can find out more about Equality and Diversity at https://www.st-andrews.ac.uk.hr.edi/. The University of St Andrews is committed to promoting equality of opportunity for all, which is further demonstrated through its working on the Gender and Race Equality Charters and being awarded the Athena SWAN award for women in science, HR Excellence in Research Award and the LGBT Charter;  http://www.st-andrews.ac.uk/hr/edi/diversityawards/.
By RowanMartindale - November 21, 2016 No comments:

Deadline to Apply: Extended to November 23, 2016, to encourage more participation from the Deep Biosphere, Earth Connections, and Earth in Motion themes of the IODP Science Plan.

Participation support is available from the Consortium for Ocean Leadership for a limited number of graduate students and early career researchers (i.e., completed their PhD within the past 10 years) from U.S. institutions and organizations. Past research experience in Gulf of Mexico and/or Atlantic Ocean basins is not required. Participants will share rooms.

U.S. scientists who are interested in participating in the workshop should send: (1) a 2-page CV or biographical sketch (NSF-style); and (2) a 1-page statement of interest to Andy Fraass (FraassA@si.edu) no later than November 23, 2016. In the statement of interest, please identify your research specialty and the IODP theme that you most identify with (see IODP Science Plan). The deadline has been extended to November 23rd to encourage more participation from the Deep Biosphere, Earth Connections, and Earth in Motion themes.

MOTIVATION: Scientific ocean drilling is central to the study of Earth’s climate history, tectonic evolution, and deep biosphere. A large, dynamic, and diverse ocean drilling community is vital to the health of the program; engaging early career scientists in cruise planning and leadership is critical to the future of IODP. For early career scientists who are new to the community, developing an IODP proposal from conception to drilling is a daunting task that can appear insurmountable. This workshop for early career researchers aims to correct that. Participants will hear a series of speakers explain the structure of IODP and how early career scientists can become more deeply involved. Then, they will work on the initial stages of developing real drilling proposals (to be vastly expanded post-workshop) in the Northern Atlantic Ocean and Gulf of Mexico.

This workshop will:
1) Provide early career scientists with direct experience in the IODP proposal process,
2) Build an interdisciplinary community of early career researchers that will be able to develop active research programs in coordination with the evolving landscape of ocean drilling research,
3) And develop drilling proposal ideas to investigate the North Atlantic Ocean and Gulf of Mexico, where the JOIDES Resolution is expected to be drilling in FY20-21. Prior research experience in these basins is not required for participation.

OBJECTIVES: The primary objective of this workshop is the development of the next generation of IODP scientists, both by educating participants about upper-level IODP functions and building collaborative relationships within our peer-group. We aim to attract a diverse array of specialties (geophysics, paleoceanography, deep biosphere, tectonics, etc.) to facilitate interdisciplinary collaborations. To achieve these goals, groups of participants will work together on developing the initial ideas for real IODP proposals. We expect to leave the workshop with “roadmaps” for drilling proposals, which can then be extensively developed in the following months into Preliminary Proposals for submission to IODP. Experienced ocean drilling researchers will give talks on the IODP proposal process, mentor groups as they work on their proposal ideas, and provide a mock review at the end of the workshop.

Applications are invited for a two-year Research Fellowship (postdoctoral) in Paleobiology relating to the goals of the Deep Time Initiative at the National Museum of Natural History.  This fellowship involves 75% time commitment to research and 25% time commitment toward advancing science education at NMNH through direct interaction with our public. The appointment provides stipend ($48 K/yr), a research/travel allowance ($4 K/yr), support for health insurance ($2K/yr), and a one-time relocation allowance ($1K). The successful applicant will be expected to conduct independent research through the study of systematics, paleoecology, functional biology, field investigations, etc., and involving NMNH collections.  The awardee will be expected to be involved in the scholarly activities of the department and public outreach in the museum.  Priority will be given to proposals that: 1) involve research related to Deep Time over-arching themes, 2) indicate a high standard of research productivity, creativity, and interactivity, 3) provide evidence of ability to communicate science to the public - orally, in writing, through social media, citizen science, etc.

The Deep Time (DT) initiative is focused on understanding connections between 4.6 billion years of environmental change, the diversity of life, and the future of our species on Earth. The four focal themes for our Deep Time research, exhibits, and outreach include: 1) evolution of organisms, 2) evolution of ecosystems, 3) earth processes, 4) connections among these forces including to our human past, present and future.  This is a critical time in the history of our planet because one increasingly abundant, heterotrophic species has become a global scale force of rapid environmental and biotic change.  Through understanding of the fossil and geological record, the Deep Time Initiative seeks to inform and inspire the global community about connections between the past, present, and future of life on Earth and help create citizens for a changing planet.

Note: Applications are welcome for research specialists in all types of fossil organisms, especially dinosaurs and marine macro-invertebrates because of their important roles in the new exhibit and in educational programming.

Information about the Paleobiology Department and the Evolution of Terrestrial Ecosystems (ETE) Program can be found at http://paleobiology.si.edu/, http://naturalhistory.si.edu/ETE/ , the collections at http://collections.mnh.si.edu/search/paleo/, and the Deep Time exhibit renovation at http://www.mnh.si.edu/fossil-hall/

Applicants should have a proven record of research accomplishment and knowledge of the fossil record.  Starting dates for the fellowship are between May 1 and August 1, 2017, and all formal requirements for a Ph.D. must be completed before the end of this time interval. To apply, send: (1) curriculum vitae; (2) pdfs of recent publications (maximum of three); (3) proposed research for the two-year interval (up to 5 double-spaced pages, including figures, 11 point type); (4) a 1-page teaching and outreach statement of accomplishments and interests, and (5) two letters of reference submitted separately by the referees.

Note that this Deep Time Fellowship call is separate from the Smithsonian's regular Fellowship Program (http://www.smithsonianofi.com/fellowship-opportunities/smithsonian-institution-fellowship-program/), which has a fixed deadline of December 1 and is 100% research.

The Smithsonian Institution is an Equal Opportunity Employer.
By RowanMartindale - November 17, 2016 No comments:

Today seems to be an appropriate time to post this! GSA Geobiology and Geomicrobiology (GBGM) Division members, please go vote for your 2016-2018 executive committee; you can even do this while you are waiting in line to vote for your favorite candidate the US election (assuming you're in the US and can vote). 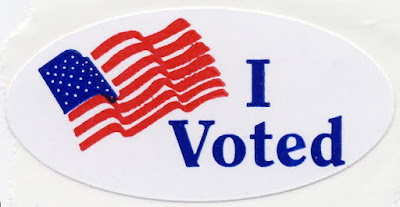 You can access the ballot for the 2016 Management Board via an email (sent to all members this morning) or this link (use your GSA member number or email to log in). Open positions are Vice Chair, Secretary, and Treasurer, and the biographical information for each candidate is linked next to their name on the ballot. Ballots will be open through 30 November 2016.